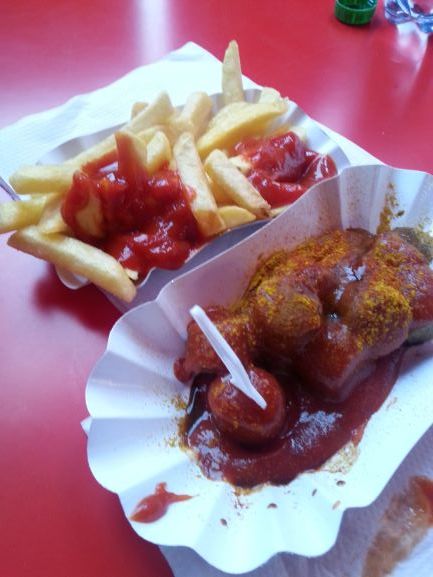 Currywurst might be the most popular fast food in Berlin.  It’s cheap, it’s filling, and it’s delicious.

Currywurst stands are all over the city, little booths with a tiny, open kitchen where the sausage is steamed and then fried.  There’s usually a couple stand up tables where you can eat your currywurst, but a lot of people take their lunch to go.  Currywurst is popular with all kinds of workers in Berlin, from construction workers to office workers who consume a reported seventy million currywurst a year.  That’s twenty currywurst shoveled down the throats of every man, woman, and child in the city every year.

What makes currywurst so popular?  I think it has to be the sauce.  Imperial Britain, which occupied India until the middle of the last century, had started to enjoy Indian food and brought curry powder with them when they worked on the reconstruction of Berlin after WWII.  An enterprising young Berliner, Herta Heuwer, obtained some ketchup and curry powder from British soldiers and created the magical sauce that she used to top sausages at her food stand.  There are variations on the sauce; some use Worcestershire sauce instead of ketchup, others add chopped onions, but anywhere you go in Germany, you’ll find currywurst.

Since we’re vegetarian, we didn’t partake in the currywurst custom, that is, until we discovered Curry at the Wall, a vegetarian currywurst stall just a block from our hotel.  Instead of sausage, they deep-fried chic pea balls, kind of like falafel.  We added the traditional side of french fries and dug in to the spicy goodness!  If we had stayed any longer in Berlin, I’m sure we would have been back, but Christmas in Torino was awaiting us.