Sicily might not be the first place you think of when you think of chocolate, but it should be. Chocolatiers still practice the traditional cold-pressing method of making chocolate that you can see up close.

Modica was first inhabited by the Sicels tribe more than 3,000 years ago. The Romans took control of Modica in 241 BC. In 845, Arabs took control of eastern Sicily and ruled Modica for 250 years until the Normans took over.

In 1474 on Assumption Day, hundreds of Jewish people were murdered by mobs in Modica. The so-called “massacre of the assumption” was fomented by fanatical Priests and resulted in the destruction of the city’s Jewish Quarter.

A massive earthquake leveled much of southeastern Sicily in 1693. The monster quake caused numerous buildings to collapse from Palermo to Messina to the island nation of Malta.

Modica rose from the rubble of the 1693 earthquake and rebuilt. The architectural style of the time was baroque, specifically Sicilian Baroque, which was influenced by Spanish Baroque because Spain was in control of Sicily at the time. Baroque is defined by its ornate flourishes, fanciful facades, intricate carvings, and spectacular statues that populate its churches, public squares, and aristocrat’s houses.

One of the most gorgeous sites in Modica is the church of San Giorgio. Not just for its design, but also because of its prominent location on top of a hill.

There are two parts of the city of Modica, Upper Modica (Modica Alta) and Lower Modica (Modica Bassa). Of course, the cathedral is in Modica Alta, and can be reached by car. But, there is also an elaborate staircase which was built in the late 19th century and connects Modica Bassa to Modica Alta. The climb is beautifully decorated with flowering gardens. Pause and enjoy them, you’ll want to stop anyway, because the 300 steps to the church are exhausting. The “heart attack climb” as my friend Mike jokingly referred to it. 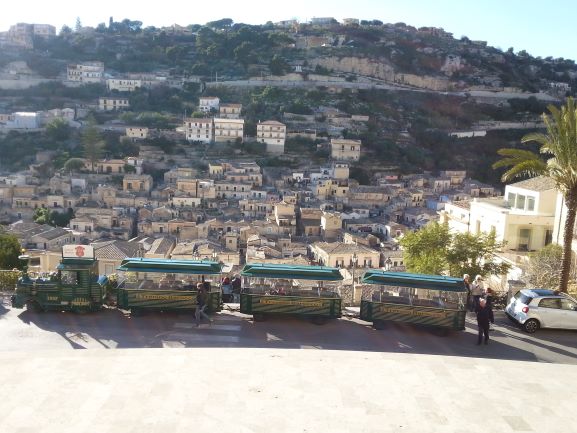 There has been a church on this site for over 1,000 years. But the Arabs of the Byzantine Empire destroyed one and multiple earthquakes destroyed others. After the 1693 earthquake severely damaged the church it was restored in its current baroque style. Inside there is famous artwork from the 14th and 15th century.

The walk back down the steps is much easier, of course. In Lower Modica there’s another gorgeous church, San Pietro. Luckily, there are only a couple dozen steps to reach that church. The gate leading to the staircase and the edges of the staircase are decorated with full size statues of saints, including the church’s namesake.

Climbing hundreds of stairs, you have earned your reward. Chocolate! 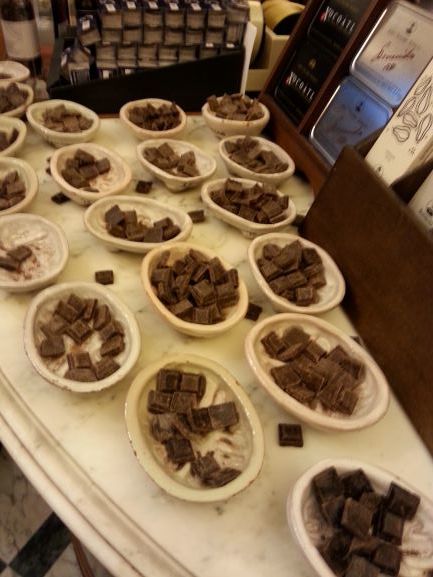 By far, Modica’s most famous export is chocolate. But, the unique thing about Modica’s chocolate is how it is made. Almost all commercial chocolate undergoes a process called conching. A conche is a machine that scrapes and agitates chocolate to make it smooth, creamy, and uniform in texture. Conching also heats the chocolate to 120-180°. Even the artisan chocolate maker in your city who grinds cacao nibs on a stone hand grinder heats the chocolate. That’s because heat is required to dissolve the sugar and give the final product a smooth texture.

Your first stop in Modica should be Antica Dolceria Bonajuto, the most famous chocolate shop in the city, operated by the same family since 1880. The importance of the Bonajuto family to Modica cannot be overstated.  Their chocolate lab and retail store set the stage for all the other shops that dot the city now.

Just off Corso Umberto I is their shop and chocolate making kitchen.  You’ll be shocked how tiny the space is.  Squeeze in and make your way to the samples.  In small ceramic dishes are over a dozen kinds of Bonajuto chocolate. A large window gives you a peek into the kitchen where they make some of their famous confections.

You can book a tour of the facility (minimum 8 people), but do so ahead of time. You’ll be amazed at how much of the process is still done by hand, including the “beating.” Workers put the chocolate in small molds and bang them on the counter to remove any residual air bubbles. In an age of automation, industrialization, and corporate profits reigning supreme, it is great to visit a place where time stands still, or maybe even reverses itself.

Wander the streets and pop into some of the chocolate shops. There are dozens of them. Sample chocolate from different makers and find your favorite. And don’t forget to pick up a few bars. For the $10 you spend on a bar of artisan chocolate in the states, you can get five bars of Modica chocolate. And your friends will be delighted with its unique taste and texture. Plus, it goes great with Sicilian red wine.

The character of Inspector Montalbano was the protagonist of a series of detective novels by Italian writer Andrea Camilleri. Many of the novels have been translated into English.

Montalbano gained great popularity through the TV series of the same name which began airing on Italian TV in 1999. Subsequently, the series has been shown on the BBC as well as in France and Australia.

The TV show was filmed in Sicily and many you can see many of the sites from the show in Ragusa and Scicli. You can see a wonderful shot of Modica and the city’s viaduct in the opening sequence of the TV show.

There are several locations in Ragusa that will be familiar to viewers of the Inspector Montalbano TV series. Trattoria San Calogero is actually Trattoria La Rusticana a restaurant that was opened in 1975 and is now run by the original owner’s daughter.

If you see wide shots of Ragusa in the show, they were likely taken from the church of Santa Maria delle Scale (St. Mary of the Stairs) in Ragusa Ibla, the old town. Like in Modica, be prepared to climb a lot of stairs if you want to see the church (242 of them).

After Ragusa was destroyed by the 1693 earthquake, it was rebuilt in the Sicilian Baroque style. Ragusa Superiore, the newer Upper Town, features a magnificent Baroque church, Duomo di Ragusa, Cattedrale di San Giovanni Battista aka the Ragusa Cathedral.

While in Ragusa make sure to visit Gelati DiVini, one of the most famous gelaterias in Sicily. Known for their unconventional flavors like olive oil and Cipollini onion, they also serve standard gelato flavors like stracciatella. Give the wine infused gelato a try.

Caltagirone is known for ceramics and its best known landmark is the Scalinata di Santa Maria del Monte, the staircase decorated with painted ceramic tiles that connects the lower town to the upper town. Built as far back as the early 17th century, the ceramic tiles weren’t added to the 142 steps until 1956.

Today, the Scalinata is not only a major tourist attraction, but also a centerpiece of local life. The steps are decorated with flowers and/or lights for holidays and specials occasions, the highlight being Fiesta di San Giacomo (Feast of Saint John) on the 24th and 25th of July when the steps are lit with thousands of oil lamps. 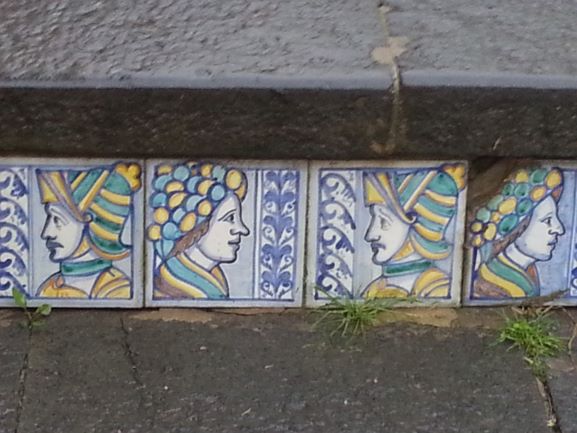 A close up picture of some of the tiles on the staircase. Notice the damage on some of these very old tiles. (photo: Brent Petersen)

On either side of the staircase are cute shops and cafés where you can purchase ceramic trinkets to take home or just relax with an espresso before resuming your climb. At the top of the stairs is the Chiesa di santa Maria del Monte. If you’re up for more exercise, for a small fee you can climb the church’s bell tower for the best view of the city.

With the importance of ceramics to the local economy, it is no surprise that Caltagirone has a ceramics museum. It is divided into three sections, the first dedicated to prehistoric ceramics dating as far back as 5,000 years. The second room focuses on Medieval ceramics while the third on modern ceramics with a focus on local artisans. The museum may not seem especially inviting due to the lack of labeling on the pieces, but is worth a visit for those interested in the history of ceramics. 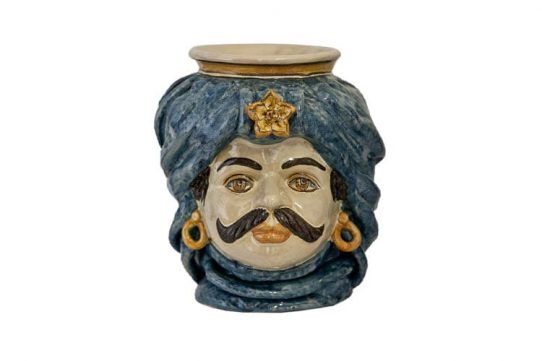 Giacomo Alessi is a self-taught ceramicist whose studio and shop is at the foot of the staircase. His pieces, reflecting the history of Sicily, have been exhibited all over the world. While there are some expensive pieces in the shop, you can also find tiles and small plates for under 100 Euros. Outstanding ceramics can also be found at the shop of local artist Riccardo Varsallona. Or, if you need Christmas decorations, check out Ceramiche d’Arte Floridia Salvatore for their unique Christmas tree ceramics in their shop crammed with cool stuff. 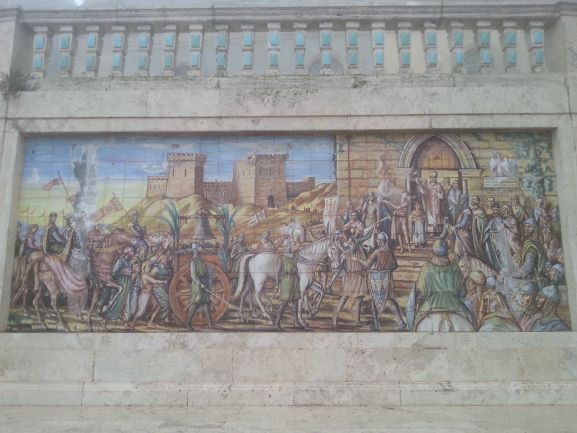 Mural near the church at the staircase in Caltagirone, Sicily (photo: Brent Petersen)

After all that stair climbing and shopping, you’re going to need a snack. Bar iudica e Trieste has cheap and filling Sicilian food. Try the arancini.

il Locandiere is a little more upscale with seafood being their specialty. The tuna is especially popular.

The bus and train stations are about a twenty minute walk to the center of town. If you decide to walk, take the route along Via Roma so you can see the public garden. This will also take you right past the ceramics museum. Trains stop running fairly early, so be sure to check the schedule. We almost got stuck for the night but luckily some kind Sicilian women pointed us to the last bus leaving town that night (even the cops we asked didn’t know about it).

Ortigia is my favorite town in Sicily. I wrote a whole post about the town and released a podcast on the town (where I also talk about Modica).

Catania is the closest International airport. From there you can take a bus to Modica (about 3 hours) or drive (about 1 ½ hours). The train requires a transfer in Siracusa.

A car is ideal if you’re planning to visit some of the smaller villages in Sicily. The bus is a good option as well. People often complain about train service in Sicily because some lines to small towns are outdated and slow. And, some of the train stations are outside the center of town by 1 km or more. That said, I’ve found the trains to be pretty reliable.

Index of Things to Do in Modica 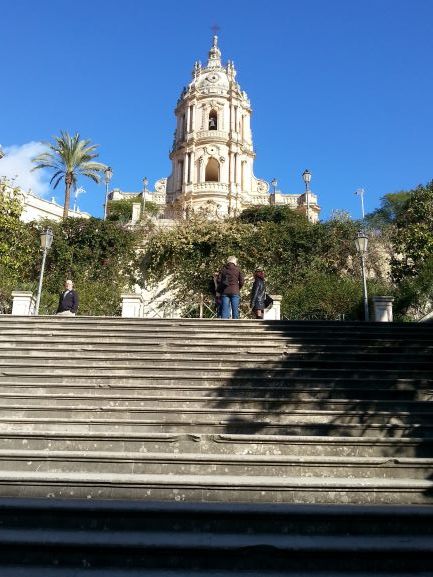 Still a ways to go to get to the top and see San Giorigio (photo: Brent Petersen)

The original and still most famous chocolate company in Modica. This should be your first stop on your chocolate pilgrimage. Free samples and bars for sale.

Baroque church worth the long climb to upper Modica. 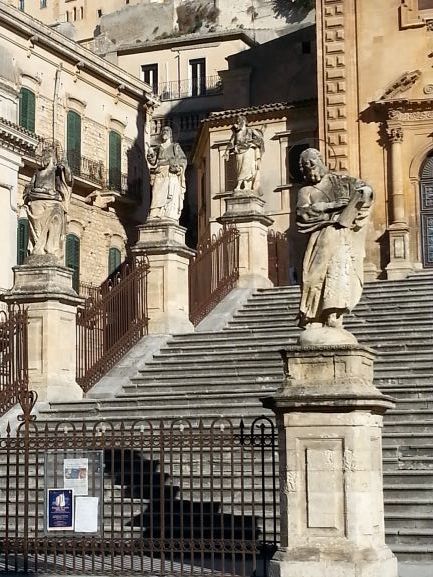 Right on the main street of Modica. Church has a fantastic interior.

Museum of WWII artifacts. Open by appointment only.

Butterfly house in Modica is a prime spot for families.

As the name implies, be ready to climb some stairs. Fantastic view. 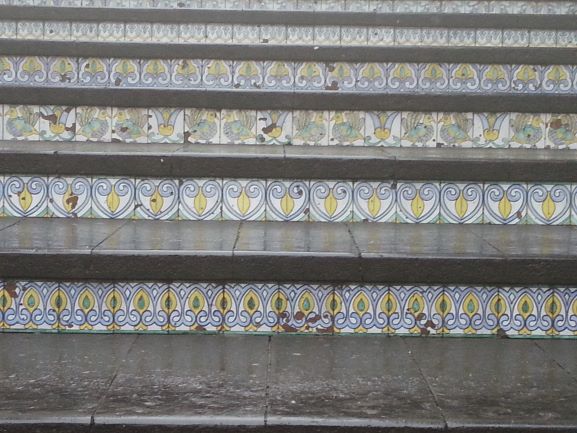 Church at the stop of the staircase. Climb the bell tower for the best view of the city. Often closed afternoons.

Ceramics museum featuring work from 5,000 years ago to modern times.

Index of Food & Drink in Modica 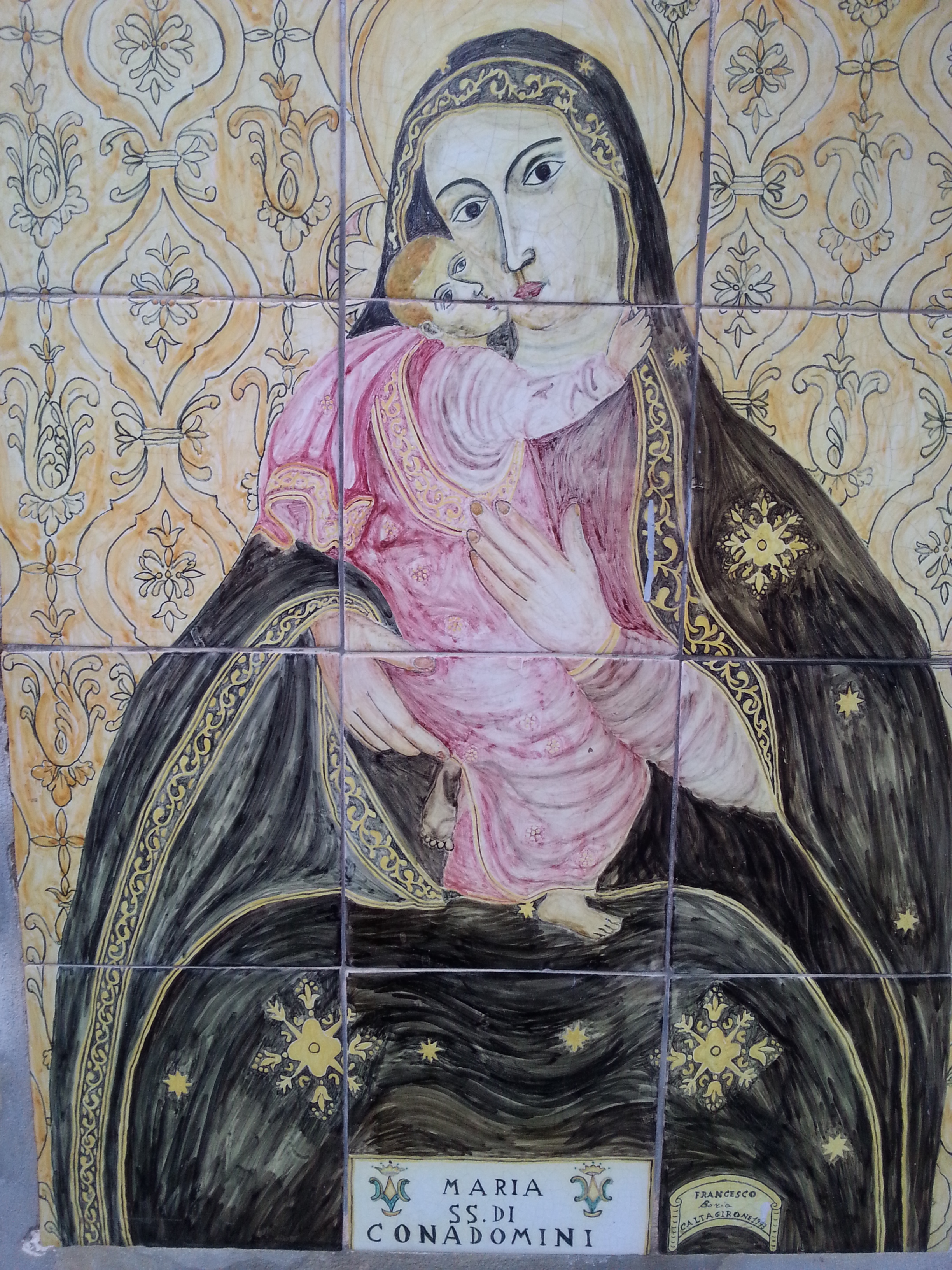 Reasonably priced restaurant in a town where some high priced places disappoint.

Vegetarian restaurant that even carnivores can enjoy. Exceptional food outside the town center of Modica in an idyllic setting. 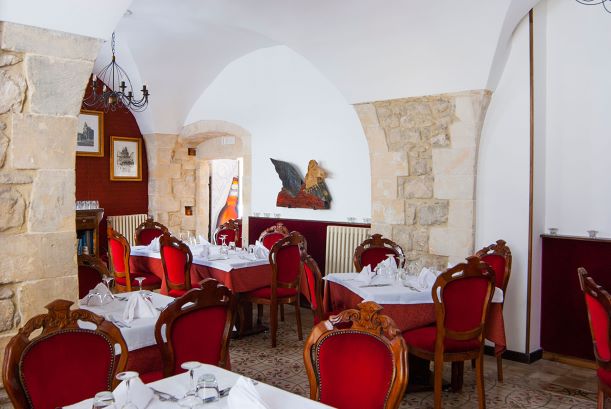 One of the most famous gelato shops in Sicily. Known for their wine gelato.

Excellent Sicilian snacks perfect after a day of climbing stairs in Caltagirone.

Index of Shopping in Modica 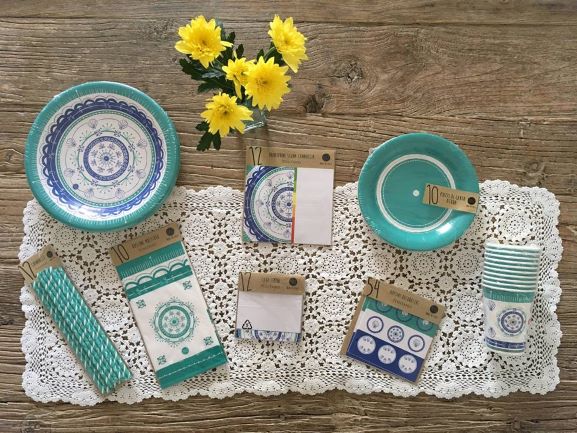 Unique one of kind gifts and souvenirs made by local artists in Ragusa.

Caltagirone’s most famous ceramicist has his shop in Caltagirone.

Index of Places to Stay in Modica

Lovely boutique hotel in Upper Modica with great views and an outdoor patio.

Boutique hotel with a lovely garden and view of the city. 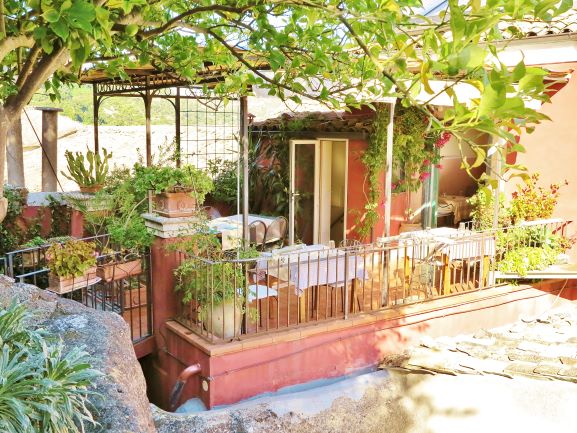 Boutique hotel in the heart of Ragusa.

Delightful B&B in Ragusa with rooftop garden where breakfast is served.