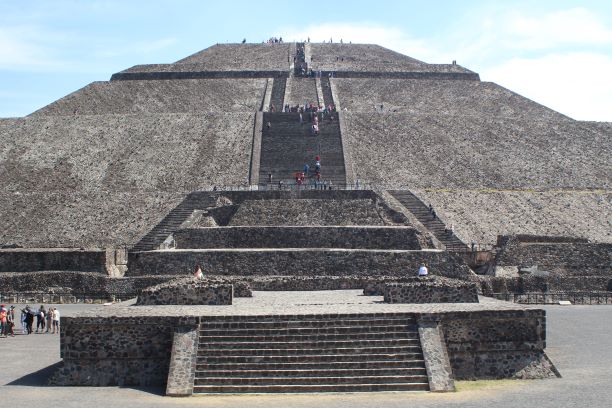 You can’t escape the heat.  Or the dust.  Or the people.  We thought we were so smart going to the Teotihuacan in February.  But it didn’t matter.  It was hot.  And dusty.  And crowded.

You look at the magnificent structure in front of you and, of course, your first thought is “How the heck did they build that?”  No cranes.  No stone cutting machinery.  No dynamite for blasting rock.  Your second though is “That’s a lot of steps.”

And these aren’t ordinary steps.  They’re taller than your average stair step.  Your hamstrings and glutes are sore just thinking about it.  But you take the first step, climb the first flight of stairs and think “Not too bad.”  Then you look up at the top of the pyramid and realize you haven’t even made a dent in this climb.

After the second flight you don’t bother looking up, it will only be depressing.  By the third you’re breathing heavily, the elevation of 7,000 above sea level isn’t helping.  At the top of the fourth set of steps, you stop to take a rest.  Your shirt is soaked and you’re panting like a dog on a summer day.

248 steps from the bottom, you’ve finally made it.  Ignore the grandmothers in their Nikes who passed you on the way up or the families who lugged toddlers and strollers to the summit.  At least you’re better off than the poor sap who asks you if you’ve seen a set of car keys.  He lost them somewhere on the ascent.