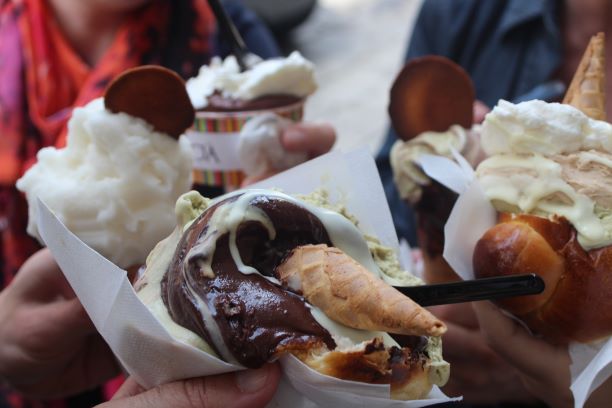 I take the cone from man behind the counter.  The cone is piled with slabs of chocolate, hazelnut, and stracciatella gelato.  I say “slabs” and not “scoops” because the man behind the counter, the gelato artisan, uses an instrument that more closely resembles a putty knife than an ice cream scoop.

After all, gelato is not ice cream.  Similar, yes.  The same?  Never!  Gelato is creamier, smoother, warmer on the tongue.  Ice cream?  It’s hard with crystals of ice that break your teeth and frozen to a temperature that gives you a headache.

Taking the tiny, plastic gelato spoon that he has stuck in the top of Gelato Mountain, I carefully dab a bit of each flavor on my spoon.  A little cioccolato, the dark chocolate, a tiny taste of the nocciola, making sure to get some of the roasted hazelnuts, and the stracciatella, complete with shards of broken frozen chocolate that are sure to cut the roof of your mouth, resulting in exquisite agony.

The man behind the counter smiles and nods politely.

“Un buon matrimonio,” I say, trying out my kindergarten-level Italian.

The man behind the counter raises his hand.  “Yes, it is a good marriage.”  He answers in English, obviously having enough of me butchering his beautiful language.

I smile and attempt to perform the rather difficult tongue stunt of licking all three flavors on my cone simultaneously.  “Can you tell me, Signore, why does the gelato in Italy taste so much better than the gelato in the United States?  Even in the places run by Italians.”

He opens his palms towards the sky.  “Bella Italia,” is his only explanation.

“Of course,” I reply, licking around the rim of the cone, too late for the gelato that has already dripped onto my fingers.  “But even if they use organic milk, and import the pistachios and lemons from Italy, it’s not the same.  Why?”

“Bella Italia, Signore.  You get your gelato and have a passeggiata and the children are playing and two old men are having a conversation with hand gestures, and a pretty girl smiles at you, and young man drives by on his vespa, and a couple sits in the piazza sharing a secret.”

“Grazie, Signore.”  I leave the shop join the colorful parade of humanity that is the nightly passeggiata.  I stop at the piazza and sit next to the fountain where the lovers, skateboarding teens and young families gather.  Floodlights illuminate the church, the baroque carvings of saints casting shadows behind the shrine.  Nearby a man plays guitar.