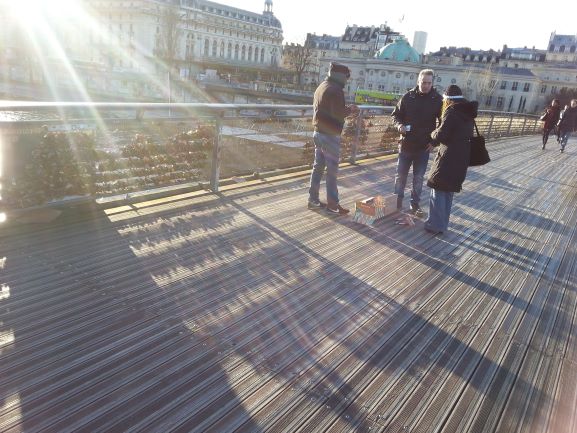 The Pont des Arts in Paris, also known as the Lovers Locks Bridge was a spot where couples would show their devotion by clamping a padlock to the railing of the bridge.  Unfortunately, 45 tons of locks made the bridge structurally unsound and the locks were removed a couple years ago.

This hasn’t stopped a new  generation of lovebirds risking the bridge’s collapse by adding more locks to the bridge.  This picture shows a couple buying a padlock from an enterprising gentleman who has set up shop halfway along the passageway.

In addition to the subject matter of the picture, I especially like the long shadows cast by the sun, slung low on the horizon in the afternoon and the rays of light streaming into the frame.