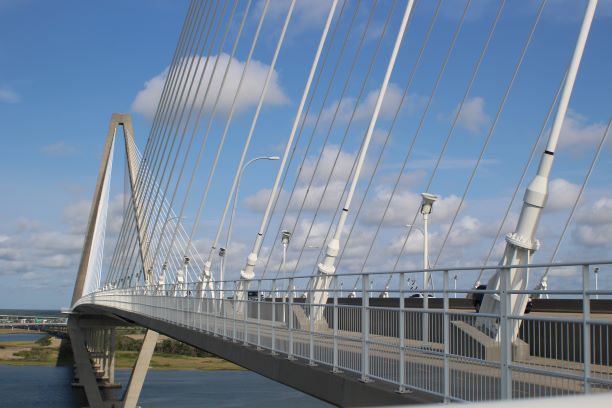 Completed in just 2005, the Ravenel Bridge (technically, the Arthur Ravenel Jr. Bridge) has become one of the iconic sites in Charleston. That’s because of the striking diamond-shaped towers with cables stretching hundreds of feet make for a beautiful vista above the Cooper River.

The best thing about the Ravenel Bridge is that you can walk or bike across it. There is a bike/ped. lane along the bridge called Wonders’ Way, named after Garrett Wonders who was training for the ‘04 Olympics when he was killed in a car/bike accident. Wonders’ Way is separated from traffic by concrete barriers allowing everyone safe passage.

The walk across the bridge is 2.5 miles each way, but you don’t have to trek the whole thing. Lots of people walk to the top where the towers are for the best view and then head back down.

To get to walkway, park at Patriot’s Point (free) and walk to entrance. It’s easy to find, just look for the low point at the bridge.

Note that if you’re scared of heights, this probably isn’t for you. The bridge was built so high to allow today’s super-sized barges access to the port. Also, some folks complain about the fumes from the trucks and cars traveling over the bridge. I didn’t find it to be an issue, but then again on the day I went, traffic wasn’t backed up on the Ravenel which often happens at rush hour. Finally, if you’re on a leisurely stroll, be aware that joggers and bikers also use this walkway. Keep your eyes open and stay in your lane.