Art with Chile in a Bag

Santa Fe is famous for its world-class art galleries and historic Native American Pueblos. But, the locals swear by a dish that’s served in a bag of Fritos.

The indigenous Tewa have lived in the Santa Fe area for at least 1,100 years. In 1607, Europeans began settling in Santa Fe, though Europeans soldiers and missionaries had been in the area for almost 70 years.

The Spanish enslaved many of the Tewa people and missionaries attempted to eradicate their culture by banning ceremonies and forcing Christianity upon them. The conflict between the two groups escalated when 47 native men were arrested for practicing their faith. Four were sentenced to death and the rest were publicly whipped, beaten, and thrown in jail. Native leaders demanded and received the prisoners’ release.

One of the released prisoners was Popé, aka Po’pay. He spent the next five years garnering support in almost 50 pueblo towns for a revolt. On August 10th, 1680, the united Native people pillaged Spanish settlements and killed 400 people including women, children and Franciscan Friars. Less than two weeks later, Popé and his soldiers drove the Spanish out of Santa Fe and then all of New Mexico.

For the next twelve years, the pueblo towns lived independently, but not united under Popé who attempted to destroy every vestige of Spanish rule in the pueblos. After the Spanish reconquered Santa Fe and New Mexico, their rule was slightly less iron-fisted; allowing native religious ceremonies as long as a veneer of Catholicism was maintained. In 2005, a statue to Popé was dedicated in the rotunda of the Congress building in Washington, DC.

In the late 1800’s the main railway line bypassed Santa Fe, effectively cutting off the economic pipeline that the trains created. Santa Fe’s population declined and it was relegated to backwater status. However, as merchants moved out, artists moved in. By the 1920’s both traditional Native American art like ceramics and contemporary art like oil painting gained popularity.

Santa Fe’s famous plaza is the heart of the city and should be your first stop. Sure, the New Mexico Museum of Art and the Cathedral Basilica of Saint Francis of Assisi are worth a visit. And the benches in the park are a nice spot to take a break and listen to the musicians busking. But, the best attraction is the Palace of the Governors on the north side of the plaza.

Here, at the Santa Fe Indian Market, authentic Native American jewelry and crafts are for sale. Stroll under the shaded sidewalk and browse for your favorite. Talk with the vendor who is often the artist who created the piece. Vendors are assigned spaces on a daily basis, so the selections may change daily. Inside the building is the New Mexico History Museum.

With many high-end jewelry stores in Santa Fe selling overpriced pieces of dubious providence, it’s nice to buy from actual artists who create one of a kind pieces.

Chile in a Bag

You may very well walk right by the Five & Dime General Store on East San Francisco Street. Even if you did wander in, you might think this time warp store was only good for postcards, batteries and sunblock. Make your way past the t-shirts, shot glasses, and incense to the back of the store. Here you’ll find one of the greatest low-rent cuisines of all time; Frito pie.

The dish was first created in Mexico before migrating to the United States. Legend has it that Theresa Hernandez, who worked at the lunch counter at Woolworth’s in Santa Fe (now Five & Dime General Store) invented Frito Pie in the 60’s, even though a recipe with chile and Fritos was published as early as 1949. Perhaps it was Ms. Hernandez’s idea to put the chile in the Frito’s bag along with the chips.

Frito pie, aka walking tacos, is deceptively simple. A single serving bag of Fritos is cut open lengthwise and New Mexico Red Chile (it’s spelled with an “e” on the end in New Mexico) is ladled on top. Add shredded cheese and chopped raw onion if you like and presto, Frito pie, the perfect portable meal. You can even get a vegetarian version in Santa Fe at Cowgirl BBQ.

Santa Fe, at its heart, is an artist’s town. Even though many artists have been forced from the city because of high housing costs, you can find local’s work everywhere you turn.

First and foremost in my book is the Palace of the Governors on the north side of the Plaza, which I discussed earlier. There are also high-end galleries clustered along Canyon Road. There is a dizzying array of artwork from oils on canvas to jewelry to Native American crafts to rugs and antiques for sale at over 100 galleries.

If you’re on foot, there’s a free shuttle bus that constantly runs on a loop through from the Plaza to Canyon Road and to other nearby sites.

A quick word of warning to any would-be art collectors. Just because a gallery is on a well-heeled drag like Canyon Road doesn’t mean the operator is scrupulous. Take Marji Hoyle and Saher Saman of the now shuttered Marji Gallery on Canyon Road as an example. The FBI raided the pair’s home in 2016 after numerous complaints about missing artwork surfaced. Artists who had consigned their work to Marji Gallery claimed they never received payment for sold artwork and customers claimed that artwork they had paid for was never received. Some judgements have been levied against Hoyle and Saman, but no payments by those damaged have been received or checks have bounced, according to the plaintiffs.

If gazing at paintings while stroking your chin in stodgy art galleries isn’t your thing, try Meow Wolf. This artist cooperative of painters, sculptors, VR creators, audio/video producers, and performers has created a space in a Victorian house that defies expectations. Visitors wander from room to room interacting with ever-changing exhibits that might be described as Halloween on acid. Truly bizarre and delightful. 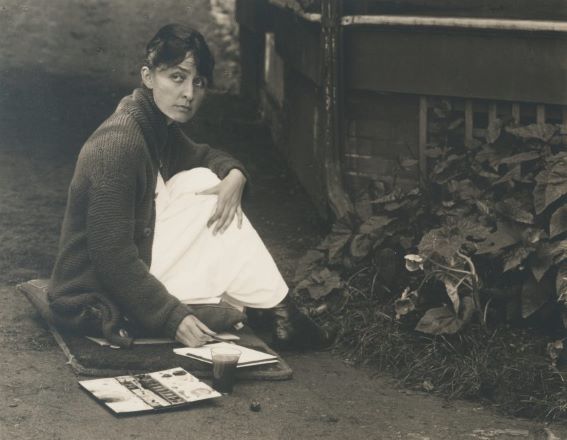 Georgia O’Keeffe is the most famous artist associated with New Mexico. But, if you picture her as a frail old lady painting flowers in the desert, then you’re missing out on the woman who was a true pioneer in American modern painting and a certified badass.

Ms. O’Keeffe spent part of each year in New Mexico starting in 1929 and lived there, more or less permanently, starting in 1949, three years after the death of her husband. The landscapes around Ghost Ranch and her house in Abiquiú inspired her paintings. In addition to the museum in Santa Fe, the Georgia O’Keeffe Museum owns both of her houses and operates tours of her house in Abiquiú.

The Georgia O’Keeffe Museum has over 3,000 O’Keeffe works, many of which are on display in the museum’s nine galleries. Paintings, drawings, watercolors, and even the photographs Ms. O’Keeffe used for reference are in the museum. When we visited the museum, photographs of a nude Georgia taken by her husband when she was in her 20’s were on display. O’Keeffe later distanced herself from the photos saying they seemed like they were from a lifetime ago. But, I think they show how she was willing to push artistic boundaries, even in the late teens and 1920’s.

Pilgrims can also follow the O’Keeffe trail, well laid out on the museum’s website. A visit to her house in Abiquiú as well as sights she painted and even the gas station where she filled up are some of the highlights of a Georgia O’Keeffe roadtrip.

The City Different is within easy driving distance of several places worth a visit.

Madrid (emphasis on the first syllable), is a forty minute drive south of Santa Fe. Only about 200 people inhabit this former mining town, but there are over a dozen art galleries to explore.

Or, head north. About forty minutes from Santa Fe is Chimayo, home to a 200 year old Roman Catholic Church. Pilgrims often walk almost 100 miles from Albuquerque on Good Friday to reach the church. The reason they make this walk is to take some of the blessed sand from a small hole in the chapel. This soil is said to contain healing properties, and you’ll see walls covered with pictures of people who have supposedly been healed by the dirt.

Drive north another hour to Taos. If the overpriced trinkets of Santa Fe have you depressed, get ready for some real sticker shock in the galleries of Taos. But, just outside of town is the Taos Pueblo, one of the longest, if not the longest, continuously inhabited community in the United States. The pueblo was built between 1000 and 1450 AD, long before the arrival of Columbus in North America and the Spanish in what is now the American Southwest. The buildings were made with mud and straw and are three stories high. 150 people currently reside in the pueblo which is open to the public. Be respectful, these are people’s homes. Ask before you photograph any residents.

Different than what you’ll get at the Five & Dime, this recipe is vegetarian. Make vegan by omitting the cheese. You can add cooked hamburger meat to the red chile sauce if you want to make the recipe carnivorous. If you use dried beans, you’ll need to start making this the day before. Canned beans can be substituted. Of course, you could just dump canned chili on top of Fritos, but where’s the fun in that?

Airport with flights to many US cities. There is a shuttle service to Santa Fe or, alternatively, a train from Albuquerque to Santa Fe.

Although there is a trolley that makes a loop through Santa Fe, bus system is limited to a fleet of 6 buses. Uber and taxis widely available. Rental car likely needed for day trips.

Index of Things to Do in Santa Fe 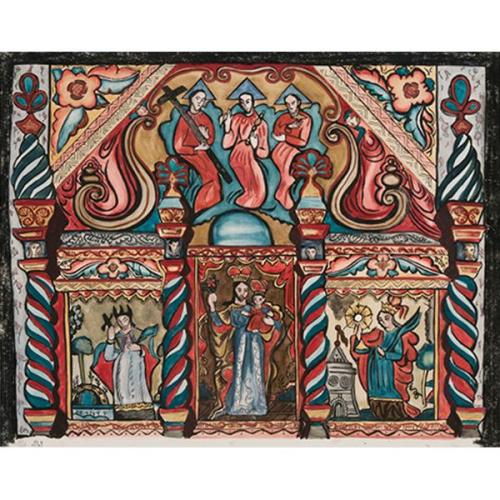 Extensive collection including works by Georgia O’Keefe and Ansel Adams

18th century cathedral built on the site of a church destroyed during the Pueblo Revolt.

Good introduction to the complex history of the state. 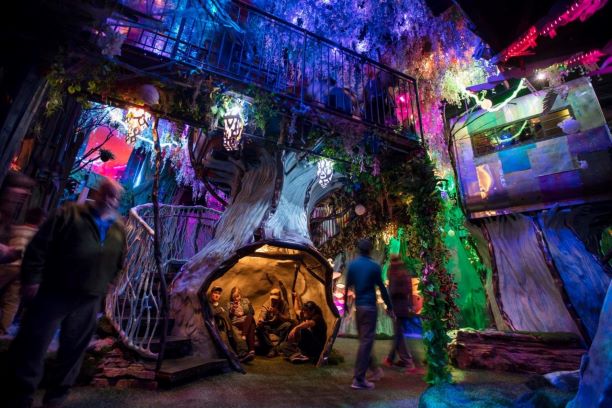 An outstanding museum with works from Georgia O’Keeffe’s entire lifetime. 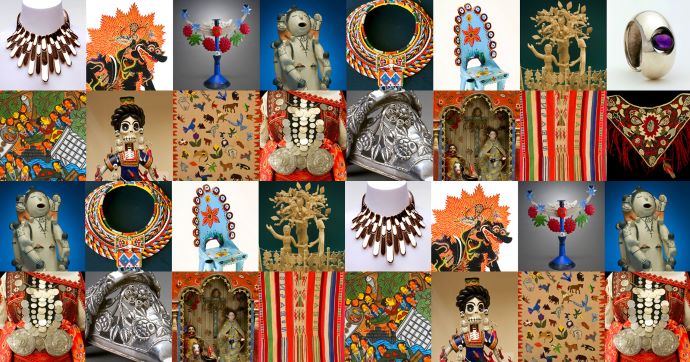 Girard Wing has dolls and figurines from all over the world. Only a fraction of the massive collection can be shown at any one time.

Rock paintings, some as 10,000 years old, populate this walkable area near the Santa Fe airport. Be prepared to climb rocks to see the petroglyphs.

Church in Chimayo whose sand supposedly has healing properties.

Best place for Frito pie. Served in a bag of Fritos.

BBQ joint with vegetarian Frito pie on the menu.

The place for smothered breakfast burritos

A Santa Fe institution. You can buy a jar of their red sauce to take home if you like. 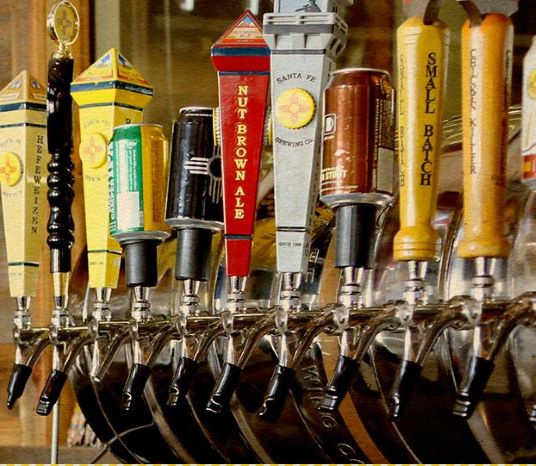 The Art of Chocolate

Index of Shopping in Santa Fe

Located under the covered sidewalk on the north side of the Plaza, Native American jewelry and crafts are for sale.

A half mile stretch lined with over 100 art galleries

Former mining town is now a tiny artist colony with over a dozen art galleries.

Index of Places to Stay in Santa Fe

Stylish two bedroom condo with balcony one mile from the Plaza.

Inn of the Governors

Close to the Canyon Road galleries and Santa Fe River.

A few miles out of town, this motel has personality to burn. Kitschy, fun, and cheap. 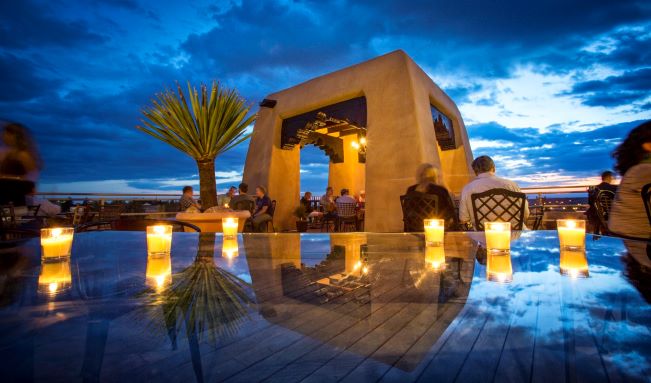 Rooftop bar at La Fonda on the Plaza

La Fonda on the Plaza

High end hotel right on, as the name says, the Plaza. Rooftop bar is an excellent spot to see the sunset.

No url value has been provided.