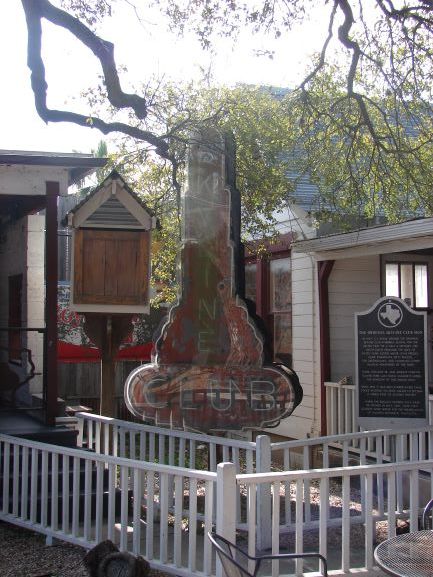 Recently, I discovered that Hank Williams made his final public appearance at the Skyline Club in Austin on December 19th, 1952. Hank would be found dead in the backseat of his Cadillac less than two weeks later.

By the end of his life, Hank was in bad shape. He was popping pain killers like candy in addition to his prodigious intake of alcohol. His final shows were hit or miss at best. Hank often cut shows short or didn’t perform at all, instead berating the audience that was there to see him before storming off.

Even with a sketchy reputation and a disastrous show in San Antonio the night before, anticipation was high for the show at the Skyline. It was sold out and probably over capacity. Accounts vary as to Hank’s performance at the show. Some say he played for three hours, and while he wasn’t sober, the show was a rollicking good time. Other accounts say that Hank only played one of the three sets he was scheduled to perform and was later taken to Brackenridge Hospital.

The Skyline Club soldiered on and hosted several famous acts, including Elvis Presley in 1955. Scotty Moore’s (Elvis’ guitar player) website has a great recollection of the Skyline and Austin.

Later, in 1960 Johnny Horton (The Battle of New Orleans) also had his last show at the Skyline Club, dying in a car accident after the show. Ironically, Johnny was married to Hank Williams widow at the time of his death.

If you’ve ever seen Honeysuckle Rose with Willie Nelson, some scenes were shot on the Skyline Stage. In the 80’s the Skyline booked more rock and punk music than country, like the Meat Puppets, who played there in 1984.

By 1989, the area around the Skyline, which was the boondocks of Austin, became built up and the Skyline was sold off and demolished. Today, a CVS stands where the Skyline used to be at 11306 N. Lamar.

The only remnant of the Skyline is it’s old sign, which is at Hill’s Cafe, 4700 South Congress. There’s even a plaque to commemorate the Skyline.