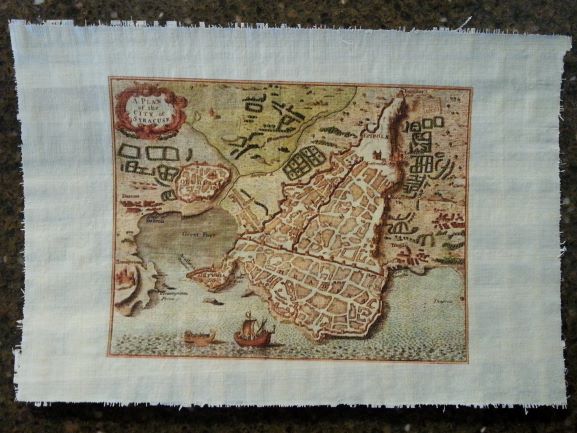 Less than an hour from Catania’s international airport in Sicily is one of my favorite towns in the world, Ortigia.  Ortigia is a small island connected by two bridges to the city of Syracuse.

There are lots of reasons to visit Ortigia, the warm weather and sparkling water, incredible Sicilian baroque architecture, fresh food markets, and the local artisans.

One of the things that I like best about Italy in general and Sicily in particular is the artisans who work so hard and take such great pride in their craft.  Recently, I posted about the chocolate in Modica, Sicily.  Those chocolate makers hand craft their sweets to make a treat you can’t find anywhere else.

In Ortigia, there is a fantastic gallery, Galleria Bellomo, run by Flavia Massara Marotta, an artist in the making and decorating of papyrus.  Flavia makes his own papyrus using a traditional method, almost weaving strips together to make the paper.  Then, the paper is painted with all kinds of designs, many of them traditional to Sicily and Ortigia.

We spent a couple of hours in the gallery, fawning over the intricate artwork and beautiful designs.  And, you don’t have to spend a fortune to get a souvenir.  Our prized purchase was a map of Ortigia, lovingly painted with extra flourishes on a papyrus about 8×11.  But you can buy smaller items like bookmarks and greeting cards for a few Euro.  We took home several to give as gifts to family and friends and they were delighted to get them!